Etymology of ‘Giant’ and Genesis 6:4 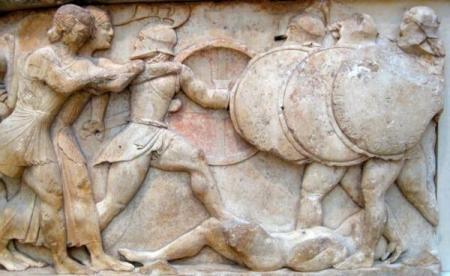 Scene from Gigantomachy or Greek War of the Giants

What’s interesting to me is that the word giant is from the Greek Gigas (pl. Gigantes) and is defined as “one of a race of divine but savage and monstrous beings… sons of Gaia and Uranus…”, Gaia being the goddess of the earth and Uranus being the god of the sky.

So, according to Greek Mythology, giants were the offspring of earth and sky.

Now, consider Genesis 6:4 and the sons of God (sky) and the daughters of men (earth).

// (KJV) There were giants in the earth in those days; and also after that, when the sons of God came in unto the daughters of men, and they bare children to them, the same became mighty men which were of old, men of renown.

// (NASB) The Nephilim were on the earth in those days, and also afterward, when the sons of God came in to the daughters of men, and they bore children to them. Those were the mighty men who were of old, men of renown.

// (YLT) The fallen ones were in the earth in those days, and even afterwards when sons of God come in unto daughters of men, and they have borne to them–they are the heroes, who, from of old, are the men of name.

// (NET) The Nephilim were on the earth in those days (and also after this) when the sons of God were having sexual relations with the daughters of humankind, who gave birth to their children. They were the mighty heroes of old, the famous men.

Much of Greek and, therefore, Roman mythology is based on actual historical events, which were distorted over time and by sin to become religions of their own. The Bible has it right!