In June 2002, my family and I visited Carlisle Cathedral (UK) specifically to look under a rug! Underneath a protective carpet along a main aisle of the Cathedral (actually the main ‘gangway’ between the choir stalls) lies a rather large tomb, inlaid with brass. The tomb belongs to my namesake (although not related, as far as I know!), Richard Bell, bishop at Carlisle until shortly before his death in 1496.

To the casual visitor, a look at this large brass, set in stone, would reveal nothing out of the ordinary (see Figures 1 and 31 [due to copyright restrictions, Figure 3 is only available in Creation magazine]). But, on closer inspection, one can see engravings of creatures that any 21st century child would instantly recognize as dinosaurs! With the permission of the Canon Warden of the Cathedral,2 the carpet was removed so that I could take photographs. Due to the fact that the brass is very worn, I was not allowed to take a brass rubbing,3 but the Warden very kindly supplied me with reproductions.4 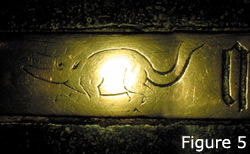 It is known that prior to the 19th century that people incorrectly assembled dinosaur bones giving rise to all sorts of wild artistic interpretations and yet these are accurate.

So, when we find these kinds of things the question always is: how did these people know what to draw unless someone had actually seen one?