Revelation 13:2 Reveals the Geographic Location of the Antichrist’s Kingdom

If you’ve frequented this site enough, you know that I do not believe Scripture teaches a revived Roman Empire.

And the beast which I saw was like a leopard, and his feet were like those of a bear, and his mouth like the mouth of a lion. And the dragon gave him his power and his throne and great authority.

This final beast empire that John is describing is the same as Daniel’s 4th beast empire [Daniel 7:7]. We can decode the animal imagery in Revelation 13:2 to find the geographic location of this final empire by cross-referencing this passage with the one in the Book of Daniel.

Daniel 7:3-6 NASB “And four great beasts were coming up from the sea, different from one another. [4] “The first was like a lion and had the wings of an eagle. I kept looking until its wings were plucked, and it was lifted up from the ground and made to stand on two feet like a man; a human mind also was given to it. [5] “And behold, another beast, a second one, resembling a bear. And it was raised up on one side, and three ribs were in its mouth between its teeth; and thus they said to it, ‘Arise, devour much meat!’ [6] “After this I kept looking, and behold, another one, like a leopard, which had on its back four wings of a bird; the beast also had four heads, and dominion was given to it.

All of these kingdoms directly ruled over the Jewish people in the Middle East and we can expect the Antichrist’s Kingdom to do the same. Here’s a helpful map of the area John is describing with the modern-day names of the nations. According to Revelation 13:2, this is the area of the Antichrist’s kingdom: 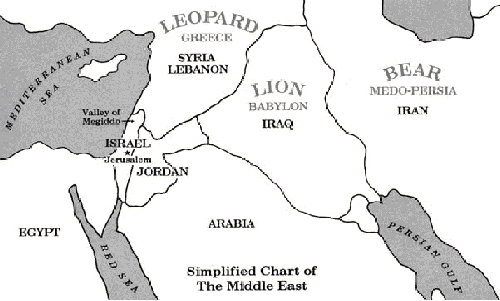 Rome is not the revived kingdom. The only mention of Rome in biblical prophecy is in Revelation 17:10 as the kingdom that’s in power at the time of John’s writing. Remember, the passage titles that name Daniel’s 4th beast empire as Rome are uninspired and, I believe, based on an interpretation of Daniel 9:26 that is not historically accurate.

Leave a Reply to The Prodigal Son Cancel reply