This picture was posted on my other blog some years ago and was intended to serve as an explanation of the evolution theory. 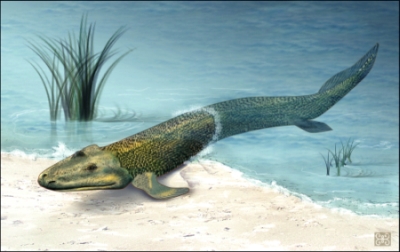 This sure is a nice, made-up artist’s illustration. The picture is funny in and of itself, however I felt the need to add some dialogue to it. Let me tell you what the thing in the picture is “thinking”:

“Hmmm, even though I’ve lived and breathed under water my whole life, I think I’ll go on ahead up there to that so-called “land”, expose myself to the elements including “air” that I know I already can’t breathe and have a walk around to check things out because I simply feel the need to live there even though I won’t be able to walk around much because I have fins.

You know what? I think if I stick my fin out of the water and beat it on the ground long enough it will eventually get the point and turn into something that will help me to get around better on land. Hey! I think I’ll name it a “foot”! Of course, I better be careful because I could always be eaten by another fish-thing while I’m hangin’ around in the shallows. Hmmm, this idea seems to contradict the very instincts of my survival… oh well.”

My friends think I’m nuts and they won’t come along until some sort of “proof” can be demonstrated to them. I told them “proof” in this case is “relative” so if I believe it can happen, then it will. Nonetheless, I think I’m going to have to concentrate real hard and grow some air-breathing lungs to convince them after my fins have turned into “feet”. By the time it takes me to do that though, I’ll probably already be dead since I wouldn’t be able to breathe the air while I was walkin’ around and if I go back into the water to breathe, then I wouldn’t be able to swim to find food for myself. By the way, I wonder what I’m going to eat up on that there “land”? Oh well, where there’s a will, there’s a way. Hey, wait! Do I even have one of those?”

You know, Satan knows the fossil record too. He was just waitin’ for the right guy to come along to introduce the lie he already conceived.