The religion of peace in action. Guess where this is taking place?

Apparently, we caught up with bin Laden and it didn’t go well for him. Now Muslims around the world are protesting his death and planning revenge. Strange.

I’ve included some photos of the action below because I want to play a little game.

Can you guess where this is taking place?

Islam will dominate the world.

Looks like the “moderates” are out for a stroll. 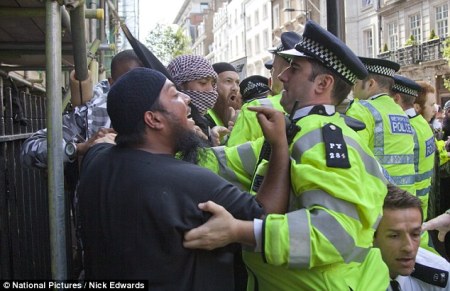 And now a little bit of peace, tolerance and love.

The man above was so overwhelmed by peace, tolerance and love that his friends had to help him up.

So, where is this taking place?

If you guessed London, you are correct! That’s right. This is happening in London, or, as it is more affectionately known, London-istan. There was even a mock funeral for bin Laden.

Wake up, people. There is no such thing as moderate Islam. Moderate Islam is about as real as liberal Christianity.

What’s on your mind? Cancel reply